The Grand Nazi of Jerusalem

Among those who should have finished with tie a bit too tight in Nuremberg in 1946 but who escaped justice thanks to accomplices who would like to be forgotten (Vatican, Red Cross, Interpol among others), Mohammed “Hadj” Amin al-Husseini (1895 – 1974) should have deserved the gallows! 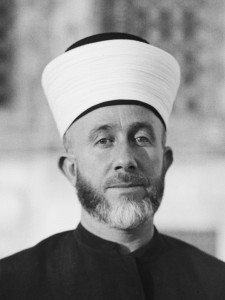 As a young man of suspicious morality, he serves as an officer in the Ottoman army before betraying in order to make an alliance with the British in 1917. Born in a rich and influential family of religious Arabs of Palestine, he becomes Great Mufti of Jerusalem in 1921 thanks to British political combinations, while he is dunce who has never shone during his Koranic studies in the Cairo al-Ahzar university. But he is an al-Husseini and has inherited cynicism, cruelty and machiavelism from his lineage. In 1929 and 1936, he ignites the great Arab uprisings which will result in the massacre and eradication of the Hebron Jewish community, when we know that the Jews had been present in Hebron since antiquity. The trouble and massacres made by the Arabs under his orders drive the Jews to organise their defence and lead to the creation of the Haganah and several Jewish terrorist groups, such as the Irgun.

Dismissed and expelled by the British, he managed to find shelter in Berlin in 1941 where he becomes a strong supporter of Nazi Germany. Hitler will promise him that after the victory of Germany, all Jews living in Arab countries will be exterminated and the time of “liberation” is close. In his memories, Hadj Amin Al-Husseini recalls that, in 1943, Himmler informed him that already 3 million Jews have been exterminated. But he is not only a passive accomplice. He intervenes personally talking to Eichmann, in order to prevent to the expulsion of 3000 Jewish children from Bulgaria and recommends their extermination. He also gives his moral and material support for the recruiting in the 13th SS division “Hanschar” which is made of Bosnian Muslims and he trains the chaplain imams.

After the war, he takes refuge in France, where the French authorities count many Vichy collaborators that discovered themselves de Gaulle supporters in August 1944. They treat him with much respect, refusing British extradition requests for collaboration and refusing also Yugoslav extradition requests for war crimes. The French attitude, disgusting with cynicism and hypocrisy, enables him to escape the trial he deserves and to escape to Egypt. He becomes the main fuel of the conflict between Jews and Arabs without losing sight on his own ambitions for power and fortune. He does so by planting division within the Arab alliance and gets insanely rich through estate property sales to Jews while forbidding these sales to other Arabs, what is called, in economy, an insider trading. Refusing any hint of compromise, sharing or negotiation, he throws the Middle-East Arabs in a fight of which we still feel the consequences today in the unfinishable Israeli-Arab conflict. He is the main responsible of the sorrow of the Arab peoples of Palestine and he is the inspiration and the founder of the Palestinian cause. Yasser Arafat was his nephew, as well as is Leila Shahid, the historical PLO spokeswoman. Still today, Mahmoud Abbas follows the example and the path drawn by Hadj Amin al-Husseini. 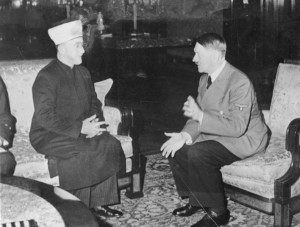 Warning to whole of those of support the Palestinian cause as presented by the Palestinian Authority, Hamas, Hezbollah, Al Qaeda or Khamenei! You position yourself in the historical heritage of a Mafioso who was mixing power, money and religion, who did not hesitate to extol massacres for his own power and capital and who should have been hanged in Nuremberg for complicity of crime towards Humanity.