A few thoughts about Palestine 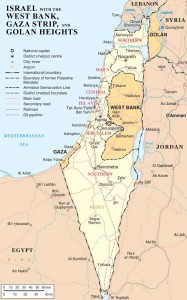 The origin of the word “Palestine”, “Filastin” in Arabic, comes from the Philistine people, a non-Semite and Indo-European trading people, presumably from Greek or Cretan origin, called “Peoples of the sea” by the Egyptians and settled on the coast between Ashdod and Gaza and that had always been sworn enemies of the Israelites. The Philistines hold their name from the Biblical name “Peleshet” meaning invaders. Fighting against an “occupation” whilst claiming a name meaning “invader” imposed by an occupier, one had to dare!

Palestine, from Latin “Palaestina” and derived from ancient Greek “Palestina”, is a name that appears in the 5th century BCE in the writings of Herodotus and later in those of Ptolemy and Pliny the Elder. In these writings, the full wording is “Palestine of Syria” and never Palestine alone. Palestine of Syria is described separately from Judea and Samaria. In 135 CE, the Romans under Emperor Hadrian unchristen the “Provincia Judea” and include it the greater province of “Syria Palaestina”, after the Bar Kochba uprising that saw the loss of the two thirds of the Jewish population of Judea under Roman repression, at the same rate of loss as during the Shoah.

The name “Palestine”, designating the whole region between Turkey, the Syrian Desert, Egypt and the Mediterranean, appears in the second century CE in the frame of a cultural cleansing of the region Hebrews, done by the Roman Empire. This name will last during Byzantine Empire rule and then during Arab and Turkish rule.

The Skyes-Picot agreement, between Great-Britain and France in 1916, divides this large territory between the two winners of the WW I. The Paulet-Newcombe agreement in 1920 establishes the borders between the French mandate of Syria and Lebanon and the British mandate, called “British Mandate of Palestine” comprising the current lands of Israel and Jordan. The name “Palestine” disappears with the end of the British mandate in 1948. From 1948 to 1967, the territory of the former mandate is divided in 3 states: Israel, Egypt (Gaza Strip) and Jordan (Judea and Samaria).

Creating a Palestinian state, already ridden by anything that can corrupt a modern nation-state, next to Israel, by imposing artificial borders based on combat lines that will have to be held and reinforced militarily by official separations already condemned globally by public opinion, is at best, scary, naïve and arrogant and refuses to learn the lessons of History and, at worst, is a real denial of recognition declaration, even a war declaration, unto Israel, the only democracy in the whole region.

We are strongly opposed to the creation of a State of Palestine. On the contrary, it is now time to support Israel fully without conditions and reserve, to support the annexing of Judea and Samaria, to claim the full return of the Temple Mount to Israeli sovereignty and Jewish religious practice and to recognize Jerusalem as the only and undividable capital of the State of Israel. Not only because we are pro-Zionist or Jewish friendly but by coherence with our own values of parliamentary democracy in a lawful state.